This week Entertainment Weekly featured Natalie Portman and an article on Star Wars. The picture looks so much like the cover of L. Frank Baum’s Ozma of Oz that I am beginning to wonder if Oz was influential to the production designers.

Interestingly enough, an article in the Chicago Reader points out that “the underwater city of Otoh Gunga could probably be traced back to John R. Neill’s illustrations in one of the Oz books,” so others have noticed this similarity too.

This pic is from the cover of the 1907 edition of Ozma of Oz, illustrated by John R. Neill. I bought my a volume several years ago for about $100. When I think back about how poorly I took care of my first edition Oz books as a kid, I just twitch.

Like the band called Ozma has a song called “Natalie Portman,” which they said they wrote way before all this Amidala stuff.

Now, surely the Melvins got the name for their CD from the Oz books; you can tell by looking at the cover of their album.

Oh, yes! And Frank OZ plays Yoda! Or, at least, the voice of Yoda.

So, to prove that Ozma and Amidala are one and the same, you can check out the following links to some pics of Ozmidala here and here. Or you can just compare the these two pictures!

A sketch of John R. Neill’s Ozma and anime Padme prove conclusively that they are one in the same! 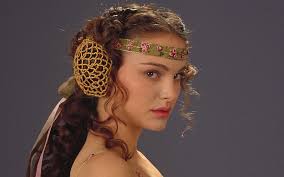 For Donna Haraway and Cyborg fans worldwide, Bruce Mazlish has an interesting article on Tik-Tok of Oz and Baum’s other mechanical creatures in the Stanford Humanities Review, called “The man-machine and artificial intelligence.”